You might be surprised to learn that the fun and vibrant world of Super Mario 64 wasn’t first accessible to the general population in an equally fun and vibrant way. In fact, it’s a matter of law and technical specifications that lay the foundation for pure, timeless wonderful. Let’s take a dive into some of the very first, publically-available, media of the super world of the Nintendo 64 classic.

The earliest known depictions of Princess Peach's castle in Super Mario 64 can be traced back to the November 22, 1995 Ultra 64 patent. This patent is significant because it describes, in full technical detail, what the Nintendo 64 gaming console would later become. Obviously, the name of the system changed from Ultra 64 in the months leading up to release. But, that's not the only difference this patent reveals.

The document contains six black and white photos of the castle grounds map. It's odd seeing Nintendo publish something so monotone (they have a color, Nintendo red, named after them!). These pictures exist in the specification documents of the Ultra 64 patent because they showcase what the Ultra 64 did: high speed efficient 3D graphics. With Super Mario 64 being the launch title of the system, Nintendo's choice of showcasing the game in their legal documents make sense.

While the patent's castle grounds remain largely unchanged, there are significant differences in design choices leading up to the final game. Most noticeably, it appears the courtyard that leads to Big Boo's Haunt was originally going to be accessible from the main castle grounds map. The images below reveal map geometry that extends past what Super Mario 64 players are used to and behind the castle.

The first of the digitally-scanned images contained within the patent is a bird's eye view of the first publically-available depiction of Princess Peach's castle.

The moat wraps nearly all the way around the castle and comes to an abrupt cut-off on the distant side of the waterfall. The back hills in the final game are pushed forward and the pool of water beneath the waterfall has spacial changes. Moving onto the castle itself, the roof lacks the back two spires and the steeple's slope is void. The giant cloud looming overhead didn't make its way into retail copies of the game. 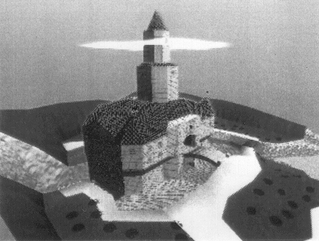 You'll notice black circles all over the grass. These are almost certainly shadows of trees that go unrendered. Whether the lack of trees is intentional or not is unknown. But, it's not out of the realm of possibility that they despawned because of their distance from the in-game camera.

Approaching the Entrance of Peach's Castle

This second image is from the perspective of Mario. Or, at least, it's what Mario could have seen had the castle not changed in the years leading up to Super Mario 64's release. The castle grounds didn't seem as safe as there's no fence preventing the player from walking off the edge and into the moat.

Crossing the moat, you'll notice the bridge is constructed with a lack of attention to detail. We also get a clearer look at the black compass above the entryway. The memorable stained glass portrait of Princess Peach wasn't always. 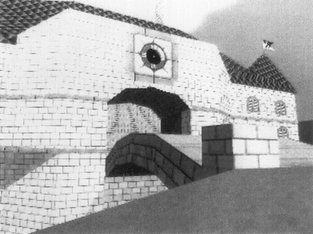 Another Arial View of Peach's Castle

Had this version of Princess Peach's castle made it into the final versions of the game, a player starting a new file may have seen this very image during the intro cutscene as Lakitu zooms by. This image provides insight into the dimensions of the castle and how widths and heights went largely unchanged throughout the iterations of Super Mario 64's development. 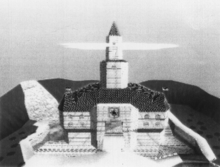 This perspective clearly shows the world geometry to the right of, and behind, an old iteration of Princess Peach's castle. Note that the unrendered tree shadows don't make their way behind the castle and only exist roughly where they are in the final game. It's possible to speculate that the back of the castle was truly never going to make its way into the final game because of this. It could be argued that the backyard in this screenshot is purely for demonstration purposes to better show off the 3D perspectives the patent covers.

But, a counter-argument (development time being wasted aside), is that the castle roof in the final game is unfinished, or, objectively buggy. The two spires at the back of the castle in the final game contain no collision data. Mario can walk straight through them. Remember, these two back spires are not present in the screenshots of this patent. Being able to pass through, what should be, solid roof suggests oversight late into development. Second, the invisible wall hugging the back of the castle in the retail versions seems lazy, especially when rotating the camera to see "into" the castle. 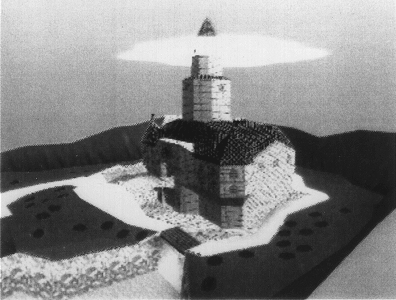 The Moat Perspective of Peach's Castle

This image is from the perspective of the moat. Notice that there's not a basement door. This suggests that either the basement hadn't been thought of yet, or the original design had a different means of entrance. 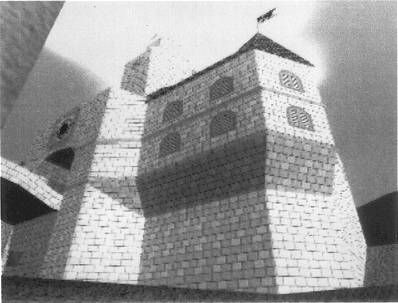 This final image present in the Ultra 64 patent shows the opacity, or lack thereof, of the cloud separating the castle steeple. It also provides further insight into how the grassy area to the right of the castle connected around towards the back and how scarce the trees present are. 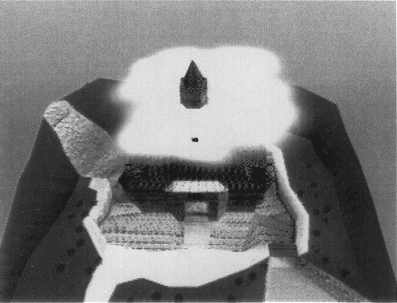